An Edinburgh partnership is presenting a movement framework for children that focuses on elements such as balance. Mike Jess and Jan McIntyre explain.

As evidence continues to emerge that our society is becoming less physically active, the importance of young children's physical activity and movement development is receiving more attention than ever. National curriculum guidelines around the world increasingly recognise the role of the physical in young children's learning. Progress, however, seems to be inconsistent. With physical activity and movement such regular features of children's daily lives, both seem to be aspects of learning that are often taken for granted. This is particularly true in the case of children's movement development, which many still believe 'just develops' as children mature and grow older.

Human movement is complex. With their bodies made up of so many bones, joints and muscles, children have the potential to make thousands of different movements on the spot or as they travel. They can make their bodies and their body parts move in different directions, at different speeds and at different levels and, in relation to objects or people. For young children, whose developing bodies have different proportions and characteristics from their adult counterparts, exploring these movement possibilities can be intriguing, frustrating and compelling.

However, in a world increasingly dominated by digital technologies and energy-saving devices, using bodies for movement is likely to become less regular in the future. The movement learning process is becoming more complex as it not only requires the setting up of regular opportunities but also the ongoing support of knowledgeable and interested adults. It is within this context that we set out to develop an early years framework, Early Moves, aimed at helping pre-school educators make sense of the complex nature of young children's developing movement.

If we acknowledge the complex nature of children's developing movement and seriously set out to help children develop a solid movement foundation for the future, there is a need to make sense of the complexity of movement development. While the Early Moves framework may be one of many presented over the years, it offers a useful starting point for those working in pre-school settings as it focuses on children's developing movement capabilities not their sport skills or their fundamental movement skills, but those key movement elements that help set the foundation for children to become creative, adaptive, confident and competent movers.

We identified four key elements as being central to our movement understanding - balance, co-ordination, posture and rotations - and these form the basis of the Early Moves framework. However, here we will be focusing on children's balance because of its particular significance during this early period of life. 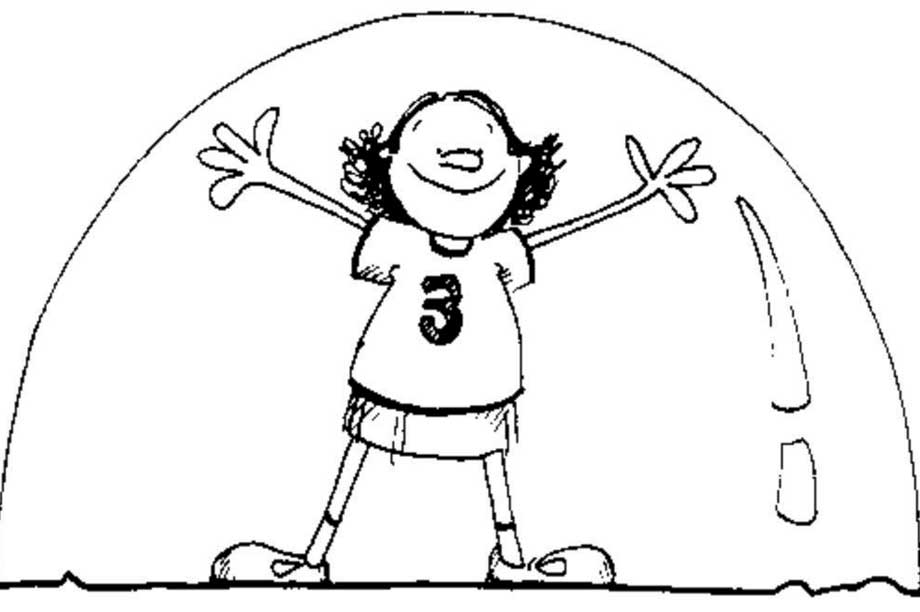 From birth, children constantly seek to manage gravity and develop their balance abilities. As such, balance is a key feature of children's movement as it is needed when trying to stay still or sit in a seat but also when attempting to travel through space. However, while children's balance improves as they grow, it is also important to offer regular opportunities to help children explore and develop their balance abilities. To do this, the Early Moves framework uses the idea of the 'bubble' to help children explore the many balance possibilities of their bodies.

Two key points help our understanding of the bubble:

For young children, exploring their bubble can be difficult in the beginning but it can also be engrossing. Hands and fingers can be used to explore, but so can other body parts - at different speeds and at different levels. Children can create many different ways to explore and make sense of their bubble.

Once children can identify their bubble, they also need to understand that no matter how or where they move, their 'bubble' is always with them: on the spot and as they travel through space. There are four main types of balance 'bubble' combinations:

Offering children the opportunity to explore the different static and dynamic possibilities of their bubble is a key part of their movement learning, with large and small objects, with different stimuli and with other children moving in their own bubbles.

Moving inside their bubbles and moving their bubbles through space is a complex, sometimes very complex, manoeuvre and is one that usually takes a great deal of practice to master as children move through the pre-school, primary and secondary school years.

Alongside balance and bubbles, children also demonstrate their developing movement competence as they co-ordinate their different body parts, move in different postural positions (or levels) and also rotate their bodies. Here is a brief description of each of these key elements:

Co-ordination The relationship between the different body sectors and body parts. These can include:

Postures The main positions in which the body is held. These include being in an upright posture, a mid posture and a lying posture.

Rotations The different circular or rotational movements the body and its parts make. These are much more common than often imagined and include turning, twisting, rocking, rolling and spinning.

While a detailed exploration of these elements is not possible here, it is important to stress that children consistently incorporate these elements into their movement repertoire. These explorations play a significant role in helping support children's movement foundation by helping them understand and feel confident about the movement of their bodies.

Consequently, it is becoming even more important today that young children are regularly given the opportunity from an early age to explore the many possibilities.

Early years managers and educators, physical education teachers and university lecturers have been working together to move away from 'quick-fix' solutions and have gradually developed a professional learning experience focused on long-term change.

The Early Moves framework, resource cards and courses were all piloted in early years settings during the first phase of the project.

Following its launch in March last year, the project has moved into a new phase with the publishing of high-quality Early Moves Resource Cards, a series of continuing professional development courses and the dissemination of the resource to more than 100 pre-school establishments.

Mechanisms are now being put in place to support the pre-schools as they begin to use the Early Moves resource on a more regular basis while data is being collected to evaluate the impact of the resource, the courses and the support on children's engagement in activity and movement learning.

For more information about the Edinburgh Early Moves project, contact jan.mcIntyre@ed.ac.uk or call 0131 651 6002