Embracing role play provides an opportunity for children to try out different ways of speaking in situations that are meaningful to them. Nicole Weinstein reports.

Role-play areas and home corners provide meaningful ways for children to explore, rehearse and use language in a variety of situations. When inhabiting the role of a firefighter, a market stall trader or a mum with a baby to care for, a child will be modelling an adult's behaviour.

They may try out a more mature way of speaking, using rhythm and intonation and expression in their voices. They may discuss their roles using past, present and future tenses to connect the ideas or events that they are acting out, they may share their ideas and feelings through words or actions, or they may just talk to themselves - a vital stage in a child's language development. As they get older, they will be able to use narrative language to develop plots or storylines and, regardless of the props that are on offer, they will use language to bring their play to life.

To help them get to this stage, settings should provide well-equipped home corners, role-play and small-world play areas themed according to their changing interests, and plenty of open-ended resources that allow them to act out their own ideas about other things that puzzle them.

Nancy Stewart, principal consultant with Early Learning Consultancy, says, 'Every aspect of language is supported through role play. The length and complexity in what the children are saying increases because they are acting and speaking like someone that they have heard, which often takes them beyond their normal conversation range. They start to get closer towards understanding how to speak to different listeners.

In terms of listening and attention, they learn how to take turns and interact with peers in different situations. They also get a lot of practise in comprehension as they begin to understand that they have to negotiate roles - who's going to do what and what the next bit of the narrative is. There's also a huge opportunity to extend vocabulary.'

In its earliest form, role play is when children pretend with objects. For example, a child might pretend to put a baby doll to sleep or say, 'Brum, brum, brum' as he pushes a plastic car on the floor. This starts between the ages of one and two when a child begins to understand that an object previously only explored in a sensory way can suddenly stand for something else. This is the idea of symbolism. Many experts feel that symbolic play is closely linked to the development of language and signifies an important stage in a child's cognitive development.

Ms Stewart says, 'Pretending with an object happens at about the same time that language emerges because they both involve the same process of using symbols - they can both be used to make something stand for something else.'

It is for this reason that children aged one to two need resources that look like the objects they are pretending them to be. A car, for example, should clearly look like a car. As children get older, from the age of two-and-a-half to three years, fewer clues are needed in their role-play resources. A car could be an abstract resource such as a wooden block.

Once they have come to grips with symbolism, children will move on to inhabiting a role, initially on their own. Much of this is taught, shown and modelled, so it is vital that practitioners engage with children and help them to see the possibility in their play.

It is often during this stage, around the ages of two to three years, that children can be heard talking aloud to themselves as they play. They may say, 'I'll put the kettle on now' or in small-world play, as they hold a character they might say, 'I'm tired. I need to go to bed.'

This is known as private or self-directed speech and it is a hugely important aspect of children using language to develop their own thinking.

Ms Stewart explains, 'Children need to put it into words before they can understand the idea for themselves and be aware of their own thinking. It really develops their language skills because they are practising putting thoughts into words and putting possibilities together.'

Between the ages of three and four years, children will move into socio-dramatic play, but a lot of them will find it difficult to play in co-operation with others until the age of four. Initially, this might start off as a group of boys running around outside pretending to be Power Rangers. There will be no narrative but they might just say, 'We're Power Rangers and I'm the red and you're the green one'.

The next stage is the plot. Different levels of language will come out of this and it is the adults' role to help children move on to this stage. They can do this by introducing a problem or a challenge for the Power Rangers and working with them to overcome it. In terms of writing and literacy later in life, this stage is vitally important because children are unlikely to be able to write a story unless they have played it out.

From the age of two, when language really starts to take off, children begin to acquire vocabulary at a very fast rate. Themed role-play areas evolving from children's interests provide an opportunity to extend their learning, and help them acquire new words and use expressions in context.

Julie Weiss, manager at London Early Years Foundation Luton Street nursery in London, set up an opticians role-play area to support a four-year-old boy who was struggling with the idea of having to wear glasses. The children brought in photographs of family members who wore glasses and they went out into the local community to take pictures of people wearing glasses, which they then put into photo books. They looked at the different styles of glasses - sunglasses, fashion glasses, reading glasses -and parents donated old frames, which were used to set up the shop. The children also made their own frames from pipe cleaners.

A sight chart was placed on the wall, giving children a chance to look at print and the letters of the alphabet. There was a reception area where children greeted the staff and asked, 'How can I help you?' Each pair of glasses had a price tag and the children used an electronic cash register when a purchase was made.

Ms Weiss says, 'This activity went on for three months. There was a lot of discussion around how people feel about wearing glasses. Children learnt a lot of new vocabulary, especially as we extended the activity to looking at binoculars, magnifying glasses and coloured lenses. The little boy became more confident and was able to express how he felt about wearing his glasses - he even enjoyed wearing them.' 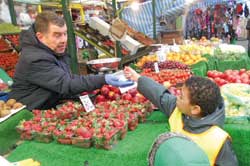 Close observation of children helps staff at Moreland Primary School and Children's Centre in Islington, central London, to plan role-play opportunities around children's interests, and they have found this particularly effective in engaging boys. A pizza restaurant with delivery bikes was set up after staff observed some of the boys using tambourines from the music area and pretending they were pizzas and delivering them to the home corner.

Catherine Lawrence, early years co-ordinator, says, 'This was a great role-play area for getting children to talk as there were lots of orders taken over the phone and in the restaurant. Involving children in the planning stages is a fantastic opportunity for talk and sustained shared thinking. It gives them real ownership of their role-play areas. We help children to mind map what the area is going to look like and what they will need to make it and then set it up together.' 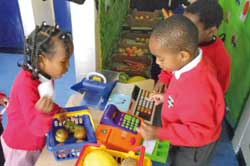 Ms Lawrence explains, 'This led to a good conversation about superfoods and fun creating giant webs with string and masking tape. We wallpapered the playhouse with superhero wrapping paper and plain lining paper to encourage the boys to draw and mark make on a large scale.'

ANYTHING YOU WANT IT TO BE

She says, 'Role play can be happening outside in a way that's not possible indoors. My best pieces of equipment were three packing cases made out of used floorboard, about a metre square, that were made by a carpenter. All the sides were closed apart from one. I had these in the garden with ladders, boxes, steering wheels, tyres and a pile of hats and tabards. Those boxes could be anything the children wanted them to be. They became buses, trains, space ships, and even Noah's Ark when we were doing a role-play theme on Eric Carle's and Isaac Bashevis Singer's Why Noah Chose the Dove. The language that the children got out of them was incredible. They had to co-operate to move them - it required a lot of discussion on how to turn over a big box and then they had to negotiate what they would do with them.'

Staff at Tanglewood Nursery School in Essex use a similar concept indoors, making use of open-ended resources - an idea which originates from some research undertaken by Pat Broadhead, Professor Emeritus of Playful Learning at Leeds Metropolitan University.

She devised the 'anywhere you want it to be space', an open-ended play area with flexible resources that stimulates high levels of co-operative play for both boys and girls. It contains lots of boxes, pots, tubes, pegs, cloths and hats so that children can make their own play themes. Details can be found in Ms Broadhead's book, The Social Play Continuum, available at www.routledge.com.

Donna MacDonald, deputy head of Tanglewood Nursery School, says that in this area children are free to explore their own ideas. She adds, 'This is particularly important for children with speech and language difficulties who might want the home corner to be a fire engine but cannot communicate it.

'We have experienced some fantastic language development coming from this area. One little girl, aged four, found a big, long box and decided that she wanted it to be a TV. A practitioner helped her to cut a hole in it and she drew some buttons on it and made a remote control. Each time she flicked channels she would jump inside the box, perform a show and then jump out again. Soon other children became interested and she directed an X-Factor-style programme with a panel of children watching her sing and perform. Each child took turns to have a go inside the box and even the quieter children had something to say.'

Provide a range of role-play equipment that will stimulate high levels of communication, interaction and language. Here are some essential resources: