Click to find out more about current vacancies at Pembury Nursery & Pre-School, or LEYF’s eleven other estate-based nurseries

Working for a nursery in a housing estate in the heart of the London Borough of Hackney in London is a great opportunity to see, first-hand, how children thrive in a community-orientated environment.

Pembury Nursery & Pre-School, an Ofsted-rated ‘Outstanding’ setting which is part of the London Early Years Foundation, is based on a housing estate that gained a particularly bad reputation in 2012 at the time of the London riots.

The Pembury Estate was basically a ‘no-go area’, explains deputy manager Hannah Abban, who has worked at the nursery since 2005. ‘There was gang fighting and crime. During the daytime, there were lots of youths hanging around, shouting and arguing and when staff worked the late shift, we all left together,’ Hannah explains.

But over the past five years, during which time LEYF took over the nursery from Hackney Council in 2015 and the Peabody Trust invested into the area, life around the community has changed for the better.

‘It’s amazing how the area has transformed and how special it is to work at the heart of such a thriving, positive community that has been through such hardship and come out the other end,’ Hannah enthuses.

The first noticeable change, which came after the riots, was the rapid reduction in violence, due to the increased police presence on the estate. This, combined with the introduction of lights around the exterior areas, made a ‘vast improvement’ to the feeling of safety in the area, Hannah explains.

When the Peabody Trust took over in 2000, they also introduced community projects, such as a community youth centre; childcare support; family literacy projects; homework clubs; one-to-one support into employment and training for young people and an estate-based employment service for older residents.

Another major change, which has taken place within the last three to four years, has been the housing regeneration scheme across the road from the Pembury estate. ‘A lot of young professionals who want to get on the housing ladder have moved into the area and we are now seeing a lot of these mothers placing their children at our nursery,’ Hannah observes.

It’s not surprising that so many parents want to attend this highly sought-after nursery, which has maintained its Ofsted ‘Outstanding’ rating for the past three years. The demographics of the families within the estate has also changed, explains Hannah. ‘A lot of people have bought the council flats on the estate and as a result, there’s a real mix of people living here. The majority still access the 15 hours funded offer but a lot of them now extend their children’s hours, meaning that many are now working.’

For Samantha Bell, who works in the baby room, it is the ideal place to complete her apprenticeship with LEYF while her four-year-old son attends the nursery. ‘I wouldn’t be here if the estate didn’t feel safe in any way, for the sake of my son. I think people should replace the word ‘estate’ with ‘community’ because that’s what the Pembury estate is.
‘Children and parents know each other outside of nursery. There’s a sense of family – they have playdates and help each other out – and this makes it a really nice environment to bring up children. It feels really welcoming. Also, the transport links are attractive to commuters. There are two Overground stations and great bus links into the City and the West End.’ 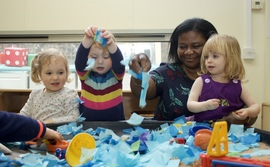 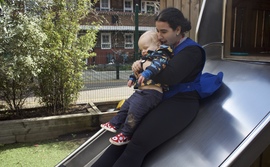 Nursery Manager Sherlene Jeffrey, who was born and raised in Hackney, has worked in the borough for all her professional life, working with vulnerable families in schools, nurseries and adventure play. Sherlene who started as manager in early September is excited to join the team. ‘I like LEYF’s ethos in supporting people in their community,’ she says. ‘There’s an abundance of opportunities for good quality teaching here. Not only are LEYF nurseries well-resourced inside but meeting children’s needs is so achievable in this rich, diverse community. What’s more, we’ve got everything on our doorstep,’ she adds.

Part of LEYF’s philosophy is to build children’s awareness of their community and regular outings are part of the curriculum. Staff at Pembury Nursery have a fantastic choice of activities to do outside the setting. A few minutes’ walk away is bustling Mare Street, where a group of children visit daily to buy fresh fruit and vegetables or visit the library for story-telling sessions. Hackney Downs, with its green open space and playground, is just 15 minutes by foot, and en-route there are plenty of sights to take in, such as the iconic Hackney Empire theatre and all the buses, taxis, dogs and people that children encounter in this up-and-coming community.

Twelve out of LEYF’s 39 nurseries are on estates, some of which are joined to housing associations or schools. Each setting is unique and thriving within up and coming communities.

If, like Hannah, Sherlene and Samantha you want to help make a difference to communities where excellent childcare is provided no matter your postcode, LEYF would like to hear from you. Working for a nursery with real team spirit and strong links with both families and communities is very rewarding. LEYF has a range of roles on offer from Early Years Educators to Management roles, set in the heart of a community. LEYF also has an Apprenticeship scheme which provides excellent training alongside working with a dedicated team who put children at the heart of everything they do.

Find out more about current vacancies at Pembury Nursery & Pre-School, or LEYF’s eleven other estate-based nurseries or to find out more details about the LEYF Apprenticeship scheme get in touch today.