David Bond is behind Project Wild Thing, a feature-length documentary released in 45 picture house and independent cinemas this month. 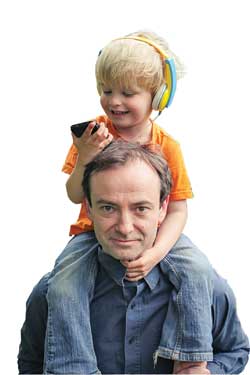 What inspired you to make the documentary?

I realised that my two children, who were three and five at the time, didn't go outside as much as I did when I was young.

I noticed how things have altered massively in three generations after speaking to my mother, who said that when she was a child she roamed five square miles. I estimated that I roamed one square mile when I was young, but my children didn't roam any further than our back garden. They preferred watching the TV or playing on the iPad.

The documentary shows you speaking to children as part of your campaign to 'market nature'. What were their reactions to the outdoors?

There were some exceptions, but in general masses of the children weren't into nature. Most thought that being outdoors posed a risk because of increased traffic, street crime and a fear of stranger danger. Our streets are actually safer now then they once were; it's just there has been a rise in the number of incidents being reported by the media.

How else did you promote nature?

Using lots of guerrilla-style techniques, including dressing as a squirrel, and sticking signs over estate agents' signs, with adverts for the use of hectares of land for free.

What impact did making the film have on you?

It was a massive eye-opener. I thought I would find there were some small issues preventing children from connecting with nature that I could identify and change, but was amazed at how entrenched the problem is.

I identified 11 barriers preventing children from being outside, ranging from the commercialisation of childhood to nature no longer being included on the school curriculum.

I knew I couldn't break all the barriers and it felt overwhelming to try and fix it, so I started with my own children, counteracting screen time with 'wild time'. My children now demand to go outside.

What impact do you hope for?

It's a funny film, with a serious heart. I hope people will catch on to the issue, even if it is only a small number of families that start spending more time outside.

Those who do want to make the change can sign up for free to the Wild Network, a collaboration of organisations committed to tackling the issues raised in the film.