The triangle of mother, child and childcarer has always been complex, says Katherine Holden in Nanny Knows Best - The History of the British Nanny.

Tensions between mothers and nannies often centred on baby care methods, which in the interwar period began to be affected by new trends in child psychology. Until the Second World War, the New Zealand childcare expert Truby King and the American behaviourist John Watson dominated the field, influencing nanny training and parental advice manuals in Britain.

They generally advocated keeping a physical and emotional distance between mother or nurse and child and following a rigid routine. Regular times were allocated for feeding and all other activities. Babies were kept quiet and under-stimulated, with the expectation that they would sleep for 20 hours each day. This kind of advice suited many British nannies, who found it easier to keep discipline if children did not have much contact with their mothers. Nurses were taught to let babies cry.

Lying behind these regimes was the idea that too much affection and attention would spoil children, either by making them overly dependent or too demanding, a view which Freud endorsed in the early part of the century. Both nursery and boarding-school regimes were designed to cultivate a 'stiff upper lip'.

By the 1930s, (these) views began to be challenged by psychoanalytic theories that saw a close bond between mother and child as crucial for child and adult health and well-being.

Susan Isaacs, an analyst who observed young children closely in a nursery setting and wrote a number of books on child development, was one of the first to disseminate views of this kind to a popular market. She encouraged mothers and nurses to relate closely to their children and engage with their feelings.

During the 1930s, Nursery World employed Isaacs (under the pseudonym Ursula Wise) to give advice to nurses and mothers, and in 1948 she published a book, The Troubles of Children and Parents, containing a collection of the letters received and advice given over the previous decades.

Nursery World was started in 1925 with the main aim of giving advice to mothers and nannies. Its readers hotly debated Isaacs' views and those of other childcare experts in the correspondence columns. One anonymous contributor was Ursula Bowlby, wife of psychologist John Bowlby.

She kept a diary recording her experiences as a mother, and co-authored a book with John giving advice to mothers, Happy Infancy.

Nursery World often published letters from nannies complaining about mothers' behaviour; but Ursula was determined to assert her authority as a mother over nurses who had never had children themselves, and urged mothers to trust their own feelings and instincts.

She stressed that she was her own 'head nurse' and described the suffering mothers went through when told that they should not pick up their babies when they cried. Like many other mothers of her class and generation, Ursula chose to use the services of a local girl from a 'respectable background' when her babies were young and later employed au pairs, believing they would be more likely to respect her views and do as they were told.

Ursula's views on baby care were rooted in her idealisation of her own mother, her upbringing by governesses and nannies, her experiences as a young mother, and the availability of domestic help to assist her with childcare. But perhaps the most important influence was her strong interest in and engagement with her husband's research. From the 1940s onwards, John Bowlby actively promoted the idea that children would suffer maternal deprivation if they did not experience a close, continuous relationship with their mother or a mother substitute.

This is an edited extract from Nanny Knows Best - The History of the British Nanny by Katherine Holden. 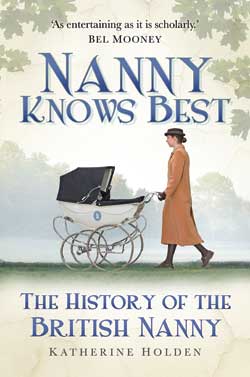 In Nanny Knows Best - The History of the British Nanny, Katherine Holden gives an entertaining yet scholarly insight into the lives of families employing the iconic British nanny.

Interwoven with personal stories, this cultural and social history charts the changing role of the nanny from wet-nurse to dispenser of advice, explores the tensions within their working life and looks sympathetically at the experiences of children in their care.

Highlighted too is the advent of professional training, the origins of the Norland nanny and the influence of Mary Poppins on pubic perception of the role.