The tantrums, biting and defiant behaviour often associated with this age group can be managed when you understand the reasons behind it, says Penny Tassoni.

Two-year-olds have a bad press. Their erratic behaviour along with tantrums and the odd bite is probably at the heart of the term 'terrible twos'. A rebranding of this age group is definitely needed, as developmentally they are actually at a very special stage. But behind every saying there is usually a grain of truth. So, what is it about this age group that causes their unpredictable behaviour and more importantly what can adults do to keep things running smoothly?

The starting point when looking at some of two-year-olds' behaviour is to understand that they are naturally impulsive. This is because their brain development is far from complete, and the area of the brain that is involved in planning and logical thought is still in development. This means that two-year-olds are more likely to 'see and do' than to weigh up the possible consequences of their actions. 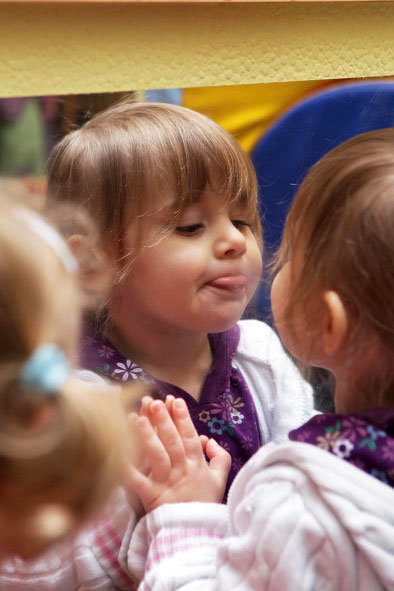 Things that are attractive to them are likely to be touched, moved or snatched at a drop of a hat. This is, of course, one of the reasons why adults have to be very attentive to this age group as this impulsiveness can easily lead to accidents.

Recognising the impulsive nature of two-year-olds is important in creating fair expectations of children's behaviour. Simply telling a child of two not to touch or do something is unlikely to be effective as the child's impulses are likely to take over once an adult is out of sight.

Recognising the potential for impulsivity also means that adults can work in ways to pre-empt potentially unwanted behaviours by, for example, providing duplicate resources so that children do not need to share. It might also mean that adults may remove items out of sight if they are likely to be a source of contention.

Linked to impulsivity is also children's restlessness. This age group likes to be busy, on the move and exploring. Sitting down for any length of time will be a huge challenge for them and is likely to result in frustrated behaviours. In the same way, while children can be highly focused and involved in their play, they are still likely to need a varied diet of different opportunities during a session. Few of the younger two-year-olds spend the whole afternoon engaged in a single activity, unlike older children who often complain that they need more time.

The restless and active nature of this age group means that we need to think about the pace of the session or day. Times when children are waiting around need to be minimised. We also need to recognise the signs that an activity or play opportunity is on the wane and be ready either to help children to re-engage or enable them to switch activity. The outdoor environment, providing that it is rich in play opportunities, seems to accommodate this age group beautifully and so it is always worth considering if it is being fully maximised.

There are some specific behaviours that are usually associated with this age group. These include tantrums, biting and defiance. In terms of responding to them and also feeding back to parents, it is important not to forget their developmental nature. A child who bites at two is highly unlikely to become a mass murderer at 20! Recognising them as 'typical' and dealing with them as such tends to be far more effective.

Tantrums come in all shapes and sizes. Some are triggered by a child not having access to something that they have seen or want, others are simply down to exhaustion. Occasionally, they have learned to use tantrums as a way of gaining adult attention.

Working out the cause of tantrums is important as we must rule out that a tantrum is not really separation anxiety in disguise. This is important because a child who is distressed because their parent is not available to them needs very different support and a remedial programme of settling in might need to be started.

While not all tantrums can be prevented, few tantrums come out of the blue. This means that one of the tricks in preventing tantrums is to work out the warning signs and to respond with great speed as there is usually very little time to be had!

In the case of a child wanting something, distraction might be useful, while a child who is tired might need a helping hand or a cuddle before being put down for a nap. Where children are using tantrums to gain adult attention, thought has to be given as to how to increase the amount of overall time the child is spending with their key person. 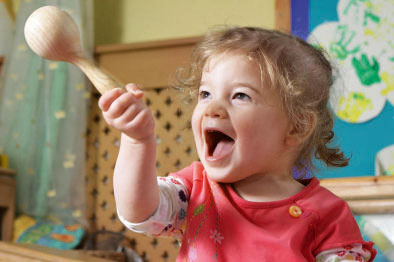 Once a tantrum is fully under way, it is impossible to curb it. In some ways, it is best to view it as a storm that just has to blow its course. Check that the child is safe and reassure others who may be worried.

Show through your body language and tone of voice that you are calm and relaxed but do not make fun of the child. To avoid children learning that this is a way of gaining attention, it is best to be a neutral presence. Once the storm has passed, you should simply reassure the child and pick up the pace once again.

If tantrums are a regular feature of the child's behaviour, it will be important to talk with parents and work through possible causes and also a consistent strategy to deal with them.

Some two-year-olds bite. Others gouge or pinch. Again, this is par for the course and links to both frustration and also impulsivity. Most acts of aggression begin life as 'one-offs'; an impulsive or sometimes exploratory act with unintended consequences. Unfortunately, if not properly responded to, children can go on a bit of a spree. Worse still some children also repeatedly choose the same victim. I suspect that this is because there are sensory reinforcements at stake which mean that the child is literally primed to repeat the act again.

Telling a child that what they have done is not nice will not work. It is a little like telling a piranha in a goldfish bowl not to touch the other fish. Instead the focus should be on preventing the next bite or incident from occurring. This will require more than just keeping an eye out. It will mean actively engaging the child so that they are busy and alongside an adult until the end of the session.

In cases where children have repeatedly bitten other children, it is worth looking for ways of changing the environment in some way. This is because children are more likely to repeat a behaviour when they are put back in the situation where they first carried it out. Planning more adult-directed activities, spending longer outdoors and overall doing things differently with the child can help to 'reboot' the child's behaviour. 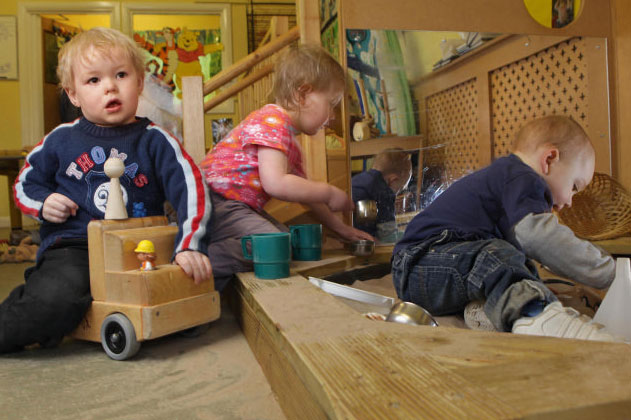 One of the changes which takes place during childhood is the desire for independence. This starts to show itself more in two-year-olds. Interestingly, while most adults are happy for children to be independent, some are less pleased when the child refuses to comply with a request that has been made. From their standpoint the child is being defiant. If this spin is put on it, there is a real danger that the adult pushes the situation into confrontation mode. This is likely to result in a full-scale stand-off as the child being developmentally impulsive may well react further.

In such situations, it is up to the adult to calm things down and take away the tension. There are many ways of doing this, including doing something silly such as putting on the offending apron or singing a song in order to distract the child. Walking away can also work to diffuse the tension as it can give children a chance to save face.

Interestingly, some children then choose to comply with the request and their decision should be acknowledged as being helpful. Whatever action is taken, it is important that the adult stays calm and recognises that defiance is often linked to the child's need for independence and so in the long run may not be such a bad thing.

Developmentally, there is a link between children's language development and their behaviour. Being able to talk prevents many of the frustrated behaviours that children show, but also helps with their impulsiveness. This means that one of the major long-term strategies that we should adopt to promote positive behaviours is to focus on children's communication and language.

The good news is that enjoyable interactions not only support a child's language, but they also support the need to have a strong attachment with their key person. For children who are showing behaviours that are age-typical but are still very frequent, do think about whether they are spending enough time with their 'adult'.

For parents who are feeling worn out by their child's behaviour, be reassuring, but also let them know that the quickest route out of this phase is to increase the amount of 'chat time' at home or out and about.

Finally, while there are many factors that can affect individual children's behaviour, tiredness is fairly universal. When two-year-olds are tired, their residual impulsiveness becomes extreme and they are likely to lose control of their emotions as well as their actions. The result is likely to be an increase in tantrums, irritability and general distress.

As it is commonplace for parents to struggle with bedtimes, it is worth touching base with parents and finding out how well their child is sleeping. As a nap in the day is likely to be needed for most two-year-olds, it is also worth exploring with parents how best to do this.

An early nap followed by plenty of exercise works well as physically active children often get to sleep more easily. Some parents assume that cutting out a nap will be the answer to any bedtime problems, but this is not necessarily so, as overtired children often struggle to relax which is essential to the process of getting off to sleep. Fortunately, there are plenty of sources of information and support available for parents and so do consider signposting these. 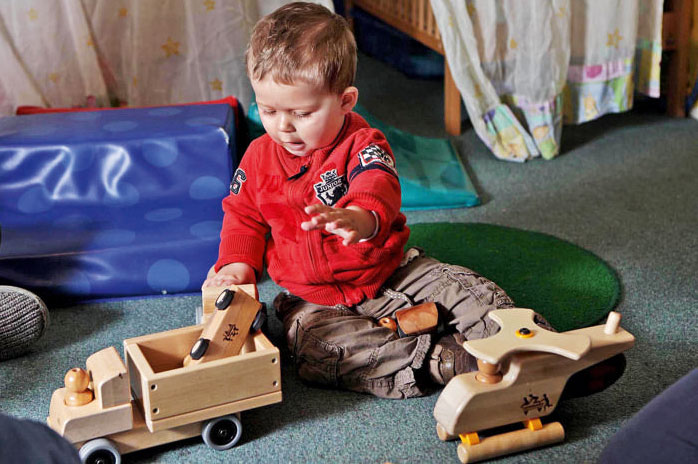