An inspiring male role model, in the form of artist Fabric Lenny, has been encouraging creative mark-making alongside improved communication and collaboration. Helen Chilton explains.

Within minutes of the children arriving one Tuesday morning, the creative area was full of investigation and exploration. Questions rang out as hands explored a variety of mark-making materials alongside our visitor - 'What can we make? What is your name?'

At Littletown Junior, Infant and Nursery in Liversedge, we have been fortunate enough to have artist Paul Slater, aka Fabric Lenny, working with us in early years through a Lottery-funded project called iCollaborate. Our early years unit is a busy, chatter-filled, fun room with 51 children in nursery and reception.

Paul worked with us two days a week for four weeks and provided a range of media and starting points for the children to experiment with, although we quickly realised we needed to extend this project further, such was his popularity and impact. 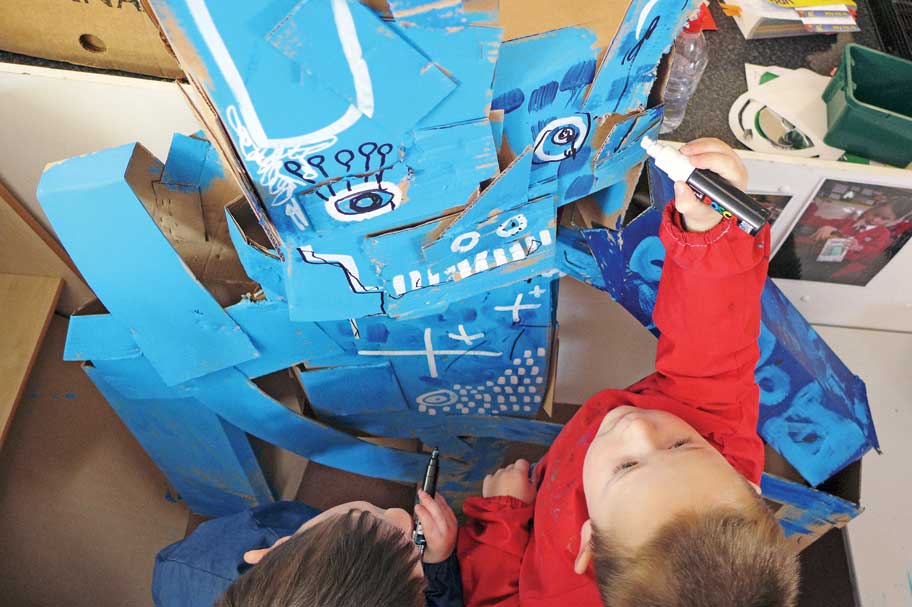 The project aimed to encourage mark-making, exploring a variety of media and to use the work produced to begin storytelling. The ultimate hope was that the children's fine motor skills and writing would improve as a result. We also ran an after-school club, where the children could teach their parents and siblings the skills. However, our careful plan for the first couple of weeks of the project quickly went out the window because the children, as they are encouraged to do, took the learning in their own direction.

Indeed, Paul says, 'The plan was to ease into the project by setting out my stall and creating a number of images to hook the children. This plan worked well for approximately three minutes, as I was joined instantly by a group of enthusiastic young artists.'

Over the sessions, Paul showed the children how to use chalk, charcoal, pens, pastel, acrylic paint, and Posca pens. He taught them how to smudge, shade, make 3D models, use an Etch-a-Sketch, add water to pen work, layer different medias, use drawing apps on iPads, and mono print. His careful explanation, modelling and patience as the children experimented meant that these young children quickly learnt some very complex skills. 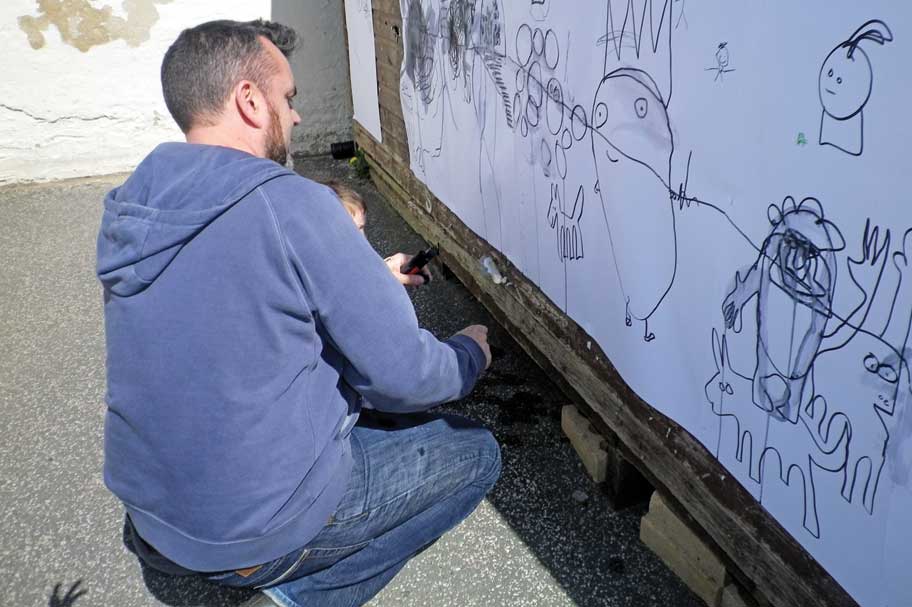 After two days of Paul working with us, we noticed that there were a large number of boys suddenly interested in the creative area, including certain boys who never normally accessed this area independently. Waiting for the following Tuesday to arrive seemed an age for some, with many asking, 'When is Paul coming again?'

As we enjoyed some warm sunny days, Paul was outside with chalks, mark-making on the ground and instantly surrounded by children. Other days, the shed was covered with paper to create a long mural or he simply put the easel outside. The children quickly learnt it was possible to mark-make outside in just the same way as indoors. 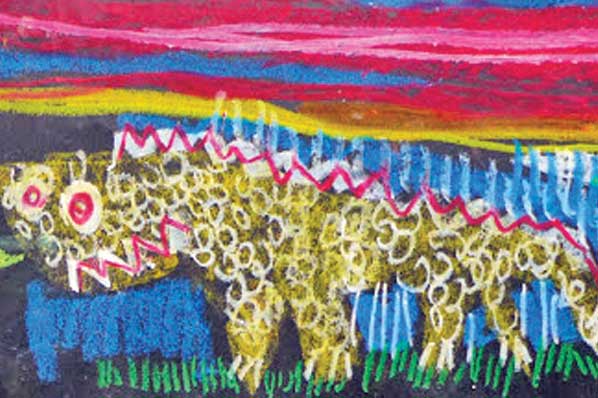 Paul showed the children how to start with a series of marks, before filling in the blank space with more marks. He encouraged the children to step back, look at the patterns and make pictures out of what was there. The wall quickly became a pop-up art gallery, with children regularly returning to add marks to different pieces of work.

The data for several of the nursery-aged boys who worked with Paul shows that those falling within the development age band of 22-36 months advanced to the 40-60 months stage between Easter and July in Writing and/or Exploring and Using Media and Materials.

The confidence and fine motor control improved and resulted in continued mark-making, even when Paul was not in - as well as neater handwriting.

Peter Cummings, a local authority officer, noted that we constantly 'focus on the development of basic and essential skills, while offering cross-curricular opportunities and giving the children the tools to be creative. The Artist in Residence is clearly supporting learning and making a valuable contribution to children's spiritual, moral, social and cultural development.' 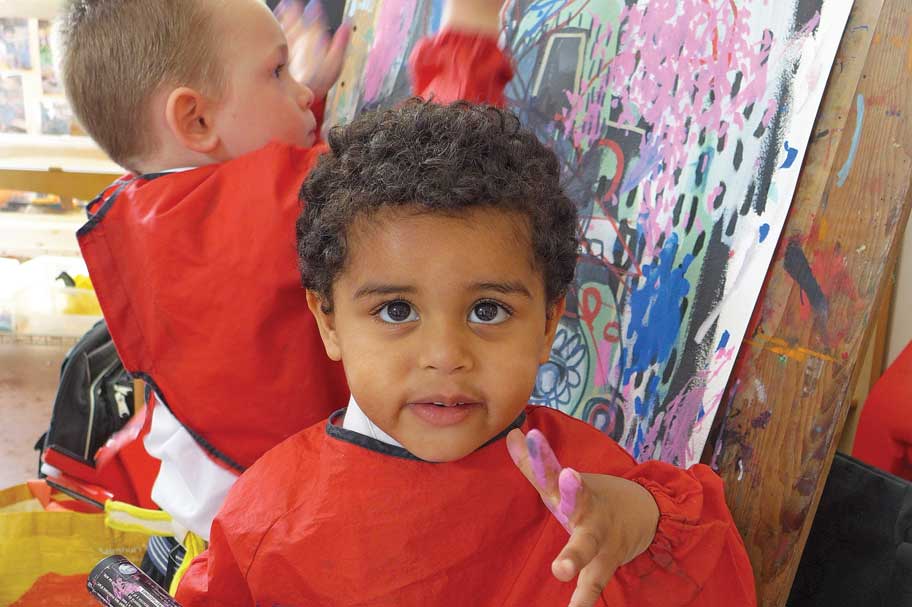 Before the project started, parental responses were limited. However, after a couple of weeks of the children working with Paul, we had lots of parents asking to join in. We even had to put on extra sessions at a variety of times to accommodate the number of families getting involved. One mum came in and said, 'Where's Paul? I'd love to meet him. All I hear at home is Paul, Paul, Paul, Paul, Paul!' 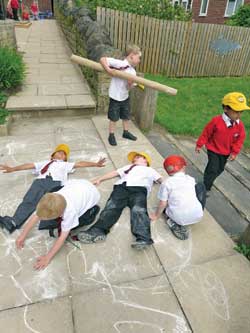 A reception boy who had been very interested in working with Paul each week was so excited when his mum and younger sister joined him. He explained to his family how to use Posca pens - 'You need to shake it to make it work'. Together, he and his sister worked on a picture and when she said, 'No, don't colour. It's mine' he calmly explained (as Paul had previously done with him) that they were going to make a picture together. He started to make marks away from hers, slowly getting closer until their work joined.

A nursery boy, who rarely accessed the creative area and did not like getting messy and dirty, was working with his mum on a big piece of paper. Mum said, 'What shall we make a picture of?' Her child replied, 'No, just patterns.' Using a paintbrush and water, he painted over the black marks he had drawn and began to smudge them with his fingers. He then chose a different colour pen and said 'fill in the gaps' and he drew lines, swirls and dots until all the gaps had gone.

Initially, some children were unsure about sharing a piece of paper to work on. However, after using large pieces of card and paper that meant children could have a corner each to work on, and with Paul's skill of joining the four pieces of work together, we started to hear 'We made that!' 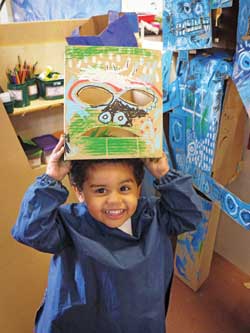 After the project finished, staff still encouraged children to collaborate and make pictures together. Indeed, two boys got a blank book from the mark-making area and began to draw together on the same page. They kept the book in their drawer and regularly got it out and worked on it together. They then started to tell stories with their pictures.

When planning our focused activities for Expressive Arts and Design, we try to make tasks more open-ended. We provide fewer examples, work more with children on pieces and make our own at the same time.

Paul is coming back in September to do some more work with the children in Early Years and we cannot wait to see how their mark-making skills have progressed and what work they will produce this time.

Paul commented, 'The confidence and dexterity of the mark-making developed by the children throughout the course of the project has been staggering, as has the team working and general celebration of collaboration.'

Head teacher Fiona Cullivan-Ward says, 'I cannot agree more with Paul on how successful this project has been in supporting the effective development of Literacy skills within Early Years, but the buzz across the whole school has been infectious. We have all seen creativity blossom.

'We have an uncompromising and highly successful ambition for all our children and this applies to all curricular areas. Through working alongside an artist, we have been privileged to see our youngest children's communication skills, writing skills and above all else their leadership of their own and others' learning flourish through planned and highly effective collaboration - a joy for anyone passionate about Early Years to observe.'

The children have absolutely loved working with Paul and sharing their skills with their parents and siblings working with them. The project has truly captured the children's imagination and the work they have produced has led to storytelling, writing and role play.