Wellington’s early years director Fiona Carter will be in the UK from the 1st February for one week and hold sessions in London, Wellington College Crowthorne, Berkshire and then Sheffield. Book a meeting with Fiona to learn more about becoming an early years teacher in China or CLICK HERE to apply today.

You can email your details and find out more about timings and location by emailing: recruiting@wellingtoncollege.cn

Four days earlier he finished his job at a nursery in Leeds. Now he’s flying east to start an exciting new chapter in his career as an early years teacher for a nursery run by Wellington College in China.

He found the job by chance. He was looking for a new career opportunity, something different, something fresh. Maybe even something overseas. While searching for his next step, he got chatting to a recruitment consultant. After a few minutes she popped him a life-changing question. “Have you thought about working in China?”

The thought hadn’t even crossed Rob’s mind. He’d never even been to Asia. The recruitment consultant filled him in: “There’s a huge demand for British early years teachers to work in bilingual nurseries in China and the cost of living there is so low that you’ll be able to save plenty of money. Have you heard of Wellington? I’ve worked with them before and they’re a very good and desirable school that’s got a number of nurseries in cities around China.”

‘We were a big team before we even arrived’

A few weeks later Rob is offered a job at Wellington’s nursery in Hangzhou, a thriving metropolis that’s China’s fourth largest city and roughly 100 miles south of Shanghai. And he takes it.

“It was a leap of faith but the opportunity to work in a really different school was exciting for me,” he recalls. “It sounded like the best opportunity. I would get to go and explore this massive country and experience what it had to offer whilst doing a job I love and getting paid to do it.”

After a month of induction meetings, Rob packed his bags and headed for the airport.

“I had never been on such a long flight before so that was all new,” he says. “On the plane I was just excited. Wellington had made it clear that they were going to help us every step of the way right from picking us up at the airport and taking us to our initial hotel. I knew they were guiding us so I didn’t have too much to worry about. I met all my colleagues in Amsterdam so we could begin getting to know each other so it was actually a really fun journey. We were a big team before we had even arrived.”

Soon after Rob finally set foot in the Wellington nursery he would now be teaching in. It’s a world apart from what he left behind.

“The nursery is amazing. It has everything you could possibly want for a nursery practice,” he says. “The finish is stunning and I am able to get solid resources which respond to the children’s learning instead of just using websites to print out endless sheets of paper.”

Even better is the opportunity to be the practitioner he set out to be when he started his career. “Wellington’s allowed me to teach in all the ways we learn about and study when at university,” he says. “Everything I’ve wanted to be able to do as an early years practitioner I can do here.”

Of course teaching in a bilingual nursery presented a learning curve. “At first, I found it very difficult because I didn’t know how I was to engage with the children,” he recalls. “But from observing them and letting them know they could interact with me, it’s like they don’t notice the language barrier. The children now respond to everything I say and we have full conversations. It’s pretty amazing when they start with zero English at all.” 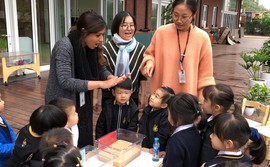 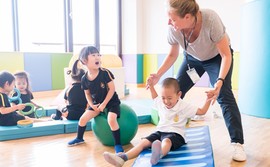 Living in China has been eye opening too.

“China is a country that most people don’t really know about properly,” he says. “We have an idea of the food, practices and that there’s lots of people but no details. What I think would surprise people is how familiar a lot of things are. If you want to buy Western products and do Western activities then you can. There are big ex-pat communities where it can be as close to home as it can be. But you can also branch out into the more Chinese lifestyle as much as you please.”

The language barrier can be a challenge but Rob says translators on phones means he can do most things “pretty easily”. In fact, easy is a word that sums up much of Rob’s experiences of living in China.

“I like how easy everything is,” he says. “Everything is done by mobile – payments, taxis, the lot. I can order anything I want and have it delivered – sometimes on the same day. You don’t need a wallet. I can go outside and hire a bike using my phone and then get a metro to another part of town. I can call a taxi home. And it’s so cheap! So much cheaper than home. 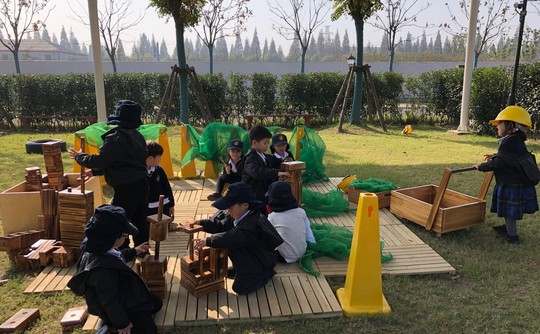 And as a Wellington nursery worker in China, Rob’s also something of a pioneer. Wellington uses the Early Years Foundation Stage curriculum in its Chinese nurseries and that child-centred approach is something that’s still new in a country where teacher-led early years education is the norm.

“It feels pretty special to be part of this nursery team,” he says. “We are giving these children an opportunity which they might not have had if we weren’t here and that’s great. I can already see how much of an impact I am having on the children and can see how their ideas are developing. We can also see how the attitude of parents to education is changing and that’s even better.

“Parents are actually understanding the philosophy and responding to it in a way that was unnatural for them at first as it was so far from where they have come from. But now they are beginning to develop alongside the children together.”

The Director of Academics for Early Years will be in the UK from the 1st Feb so please contact us to find out the nearest location to you for you to meet and discuss please email fiona.carter@wellingtoncollege.cn